There are many types of eye problems and visual disturbances, these can include blurred vision, halos, blind spots, floaters, and other troublesome symptoms. When you have a problem in your vision, it’s often more than just a minor disturbance to your life, it affects all aspects of how you live, that’s why we want you to rest assured that our San Francisco eye doctors are among the best in the business.

Amblyopia Also known as “lazy eye.” It is the loss or lack of central vision in one eye or the inability of the eye to focus.

Astigmatism
A condition in which the surface of the cornea is not spherical and causes a blurred image to be received at the retina. Slight degrees can cause headaches, fatigue and poor schoolwork. More serious degrees produce blurred vision at all distances.

Blepharitis
Inflammation, redness, burning, and itching of the eyelids, most commonly in adults, that can be associated with a low grade bacterial infection or a generalized skin condition. Caused by abnormalities in oil gland function and an alteration in bacterial colonies that normally live on the skin; treated by gentle scrubbing of the eyelid margins with baby shampoo diluted with water, warm compresses several minutes a day, and sometimes an antibiotic ointment or drop

Cataracts
Opacity or cloudiness of crystalline lens; may prevent clear image from forming on the retina. Usually develop gradually and without pain as the lens in the eye loses transparency and the lens material yellows. The result is gradual loss of brightness and a slight loss of color perception that usually goes unnoticed. Cataracts are the leading cause of visual disability in people over 65.

Color Blindness
Rare total color deficiency in which the colors of the spectrum are seen only as shades of white, gray and black

Color Deficiency
Inability to distinguish some colors and shades; occurs when the color-sensitive cone cells in the retina do not properly pick up or send normal color signals to the brain

Conjunctivitis
“Pink eye”; infection and inflammation of the conjunctiva, usually from an allergy, a virus, or a bacterium

Convergence insufficiency
Difficulty or inability of the eyes to work together at a near distance, such as when reading, writing, or drawing; can result in headaches, dizziness, and nausea; often can be treated with vision therapy or by using prismatic power in lenses

Conjunctivitis
An inflammation of the conjunctiva, the thin, transparent layer that lines the inner eyelid and covers the white part of the eye.

Dystrophy, corneal
Potentially blinding disorder which frequently require corneal transplantation to improve visual acuity—characterized by the accumulation of abnormal material in the cornea.

Diabetic Retinopathy
Can weaken and cause changes in the small blood vessels that nourish your eye’s retina, the delicate, light sensitive lining of the back of the eye. These blood vessels may begin to leak, swell or develop brush-like branches. Early stages may cause blurred vision, or they may produce no visual symptoms at all. As the disease progresses, you may notice a cloudiness of vision, blind spots or floaters.

Dry Eye
Dry eye occurs when tear glands produce too few tears and cause itching, burning or even reduced vision.

Dystrophy, macular
One of a number of progressive genetically determined degenerations of the retina, typically occurring at an early age, primarily affecting the macular area by causing anything from minimal visual acuity loss and color vision abnormality to profound loss of reading ability with night vision difficulty.

Emmetropia
No refractive error, where light coming from a distant object and entering the eye focuses upon the retina while the crystalline lens in its most relaxed (thinnest) state

Esotropia
A strabismus where the deviating eye turns inward (toward the nose), as compared to the other eye which remains pointing straight ahead

Exotropia
A strabismus where the deviating eye turns outward (away from the nose), as compared to the other eye which remains pointing straight ahead

Farsightedness
Hyperopia. The inability to see things clearly that are up close. A vision condition in which distant objects are usually seen clearly, but close ones do not come into proper focus. Occurs if your eyeball is too short or the cornea has too little curvature, so light entering your eye is not focused correctly.

Floaters
Tiny spots or specks that float across the field of vision. While floaters are usually harmless, they can be a warning of certain eye problems – especially if there is a sudden change.

Glaucoma
Occurs when there is too much fluid pressure in the eye, causing eye damage and potential blindness. Although glaucoma is the leading cause of blindness in the United States, it can be prevented if the disease is detected and treated in time.

Giant papillary conjunctivitis (GPC)
Inflammation of the conjunctiva, most commonly associated with soft contact lens wear and marked by the presence of giant bumps under the surface of the upper eyelids, as well as redness, itching, burning, mucous discharge, and blurred vision;

Graves’ disease
A common form of hyperthyroidism characterized by a goiter (enlargement of the thyroid gland), an increased basal metabolism due to excessive thyroid secretion, and often a slight to moderate protrusion of the eyeballs.

Hordeolum
Sty or stye; an inflamed swelling of a sebaceous gland at the margin of an eyelid; treated with warm compresses or antibiotics

Hypertropia
A strabismus where the deviating eye turns upward, as compared to the other eye which remains pointing straight ahead

Hyperopia
Refractive condition in which point of focus falls behind the retina; Otherwise known as farsightedness, or the ability to see distant objects more clearly than close objects.

Iritis
Inflammation of the iris; can be caused by systemic diseases (such as rheumatoid arthritis), systemic infections (such as measles, syphilis, and tuberculosis), trauma, or unknown sources

Keratits
Inflammation of the cornea

Keratoconus
Progressive thinning of the central cornea, resulting in a bulging outward and the formation of a rounded cone; produces moderate to severe corneal distortion and increase in myopia; can cause corneal scarring, requiring corneal transplantation to restore vision

Legal blindness
Blindness as recognized by law which in most states of the U.S. means that the better eye using the best possible methods of correction has a visual acuity of 20/200 or worse or that the visual field is restricted to 20 degrees or less

Macular degeneration, dry
Age-related macular degeneration (ARMD or AMD); degenerative process of the central area of the retina, the macula, causing a subsequent loss of function of the overlying photoreceptor cells; can cause complete loss of central vision and legal blindness; affects about 90 percent of those with the disease but accounts for about 10 percent of all severe vision loss from ARMD

Macular degeneration, wet
Age-related macular degeneration (ARMD or AMD); caused by abnormal blood vessel growth and leakage of blood and fluid beneath the central area of the retina, the macula, often in response to the damage done from dry ARMD; can cause complete loss of central vision (more devastating than in dry ARMD) and legal blindness; can be treated with a laser to seal off leaking blood vessels and help to prevent further vision loss, but damaged areas are lost permanently; affects about 10 percent of those with the disease

Myopia
Nearsightedness. A refractive condition in which the point of focus falls in front of the retina; the ability to see close objects more clearly than distant objects.

Nearsightedness
Myopia. The inability to see things clearly at a distance. A vision condition in which near objects are seen clearly, but distant objects do not come into proper focus. Occurs if your eyeball is too long or the cornea has too much curvature, so the light entering your eye is not focused correctly. It is a very common vision condition that affects nearly 30 percent of the U.S. population.

Ocular Hypertension
An increase in the pressure in your eyes that is above the range considered normal with no detectable changes in vision or damage to the structure of your eyes. The term is used to distinguish people with elevated pressure from those with glaucoma. It can occur in people of all ages, but it occurs more frequently in African Americans, those over 40 and those with family histories of ocular hypertension and/or glaucoma. It is also more common in those who are very nearsighted or who have diabetes.

Retinopathy
Any diseased condition of the retina, especially one that is noninflammatory

Scotoma
A blind or dark spot in the visual field

Tunnel vision
Constriction of the visual field, resulting in loss of peripheral vision 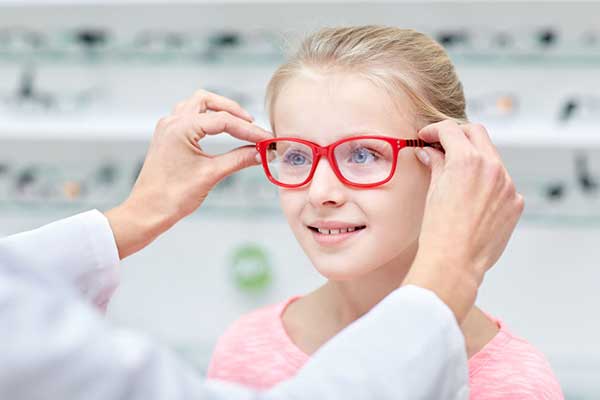